Tomb of the Unkown Soldier 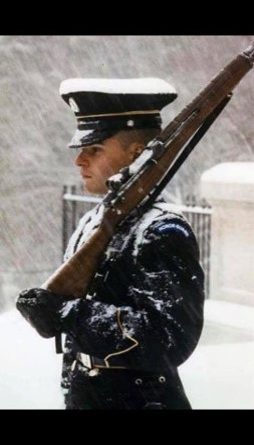 Tomb of the Unknown Soldier

ETERNAL REST GRANT THEM O LORD, AND LET PERPETUAL LIGHT SHINE UPON THEM.

In 2003 as Hurricane Isabelle was approaching Washington , DC , our US Senate/House took 2 days off with anticipation of the storm. On the ABC evening news, it was reported that because of the dangers from the hurricane, the military members assigned the duty of guarding the
Tomb of the Unknown Soldier were given permission to suspend the assignment.
They respectfully declined the offer, ‘No way, Sir!’ Soaked to the skin, marching in the pelting rain of a tropical storm, they said that guarding the Tomb was not just an assignment, it was the highest honor that can be afforded to a serviceperson.
The tomb has been patrolled continuously, 24/7, since 1930.